Journal of Peace and Diplomacy 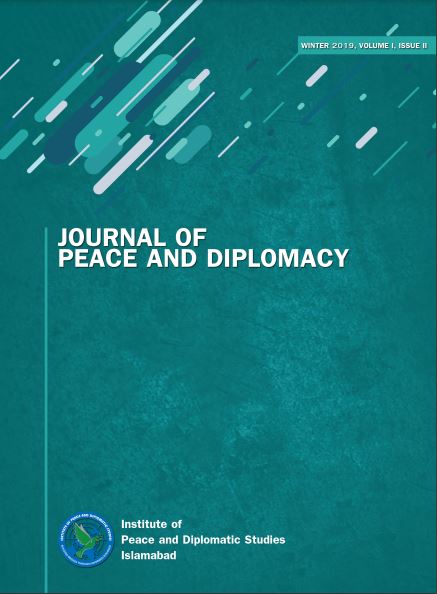 Russia and China both have launched ambitious regional projects in recent past years which have been promoted as a means to strengthen linkages with neighboring states. One of them is Eurasian Economic Union in which the member states joined in an integrated single market facilitating the free movement of goods, capital, services and labor. The second largest project is China’s One Belt One Road Initiative which is composed of two parallel projects; Silk Road Economic Belt and 21st Maritime Silk Route. This paper will attempt to explore the role of Shanghai Cooperation Organization in the implementation of these large scale projects in Eurasian region. It assesses its role that it can play its role to harmonize the competing interests of the participating countries along these projects.

Originated from Chinese Han Dynasty and expanded by Tang Dynasty, Byzantine and Roman Empires, Old Silk Road connected South and Central Asia with Europe and Middle East for trade and cultural exchange. After an extensive retro gradation, being integral part of Xi Jinping’s “China Dream” the road received an international heed. Having an estimated cost of around 4 Trillion Dollars, One Belt One Road (OBOR) will connect 50 landlocked countries to enhance economic integration. Optical Fiber Cable Project has been declared to be a “digital corridor”. While OBOR’s central enterprise, CPEC will be strengthening bilateral connectivity between China and Pakistan by linking Gwadar port to Xinjiang, resultantly, energy sector, road and railway infrastructure development is ought to explicate the progress of Pakistan, yet, the fruits wouldn’t ripen overnight. Counting on the challenges at Pakistan’s end, the fiscal ambiguities, undue-anticipations, provincial competition and confrontation on Special Economic Zones, Internal security, Cultural concerns, burden of unserviceable debt, prioritization of development, import of raw material and labor despite excessive domestic availability and absence of revenue generation plan are serious questions and concerns regarding this “Game Changer” project. Pakistan can only yield the benefits of CPEC if the government recognize and vigilantly fulfill the responsibilities, letting the provinces, small and medium enterprises seize the opportunities through CPEC.

Growing Strategic Relations between China and Pakistan: An Analysis

After the reforms of Deng Xiaoping in 1978, China accelerated its industrialisation and economic transformation process which increased industrial production in China.in the wake of reforms, China sought economic integration with other states in the world and global economy ended in securing second largest economy status in the world after the US. South Asia became the significant part of China’s new economic vision Belt and Road Initiative which gives South Asia a geostrategic leverage due to its geographical proximity with China. The Gwadar Port of Pakistan envisioned by China in her relevance to access global markets as a transit route making Indian Ocean Region (IOR) vital for China The core of this urge was motivated by two major factors i.e. the geographical linkages of Gwadar to oil rich Middle East and an alternative to other trade routes like Strait of Malacca. The major portion of China’s energy imports has to pass through the strait of Malacca, a vulnerable route, what the President of China Hu Jin Tao called in 2003, “the Malacca Dilemma”. This paper would focus on China’s other alternative trade routes to reduce the dependency on Strait of Malacca and finds secure energy and trade routes along with the role of Pakistan. The bright opportunities in limelight to strengthen the trade relationship with China and potential of partnership in China Pakistan Economic Corridor (CPEC), a cornerstone of OBOR. It is to be built through Pakistan which encompasses highways, pipelines and operational deep Sea Port of Gwadar. The opportunities come with certain challenges especially when you are located in South Asia due to its hostile security environment.

Something important has been going on at the dawn of twenty first century; international relations and communication has been interacting with each other in an ineffable manner. It is hard to find that how international relations are done, with whom it is done and what actors it really involve. This all happened because of the new media ecologies with the modernization of technology. 2 Communication has to play a very crucial role in today’s world especially in international relations. The work of Manuel Castell “Communication Power” explains how communication and new media ecologies have shaped our world in twenty first century and how relationships of power can be defined and reconfigured through communication. Manuel uses the term of “network society” & “mass self-communication”. In a “networked society” new networked pattern of relationships emerge that may be political, social and economic. “Mass self-communication” that emerged during 2000’s encouraged everyone to have their own views of the world around them and broadcast online. The power of “mass selfcommunication” cannot be neglected in today’s world as this phenomenon helped toppled governments in the Arab Spring starting in 2011. Now communication is not controlled by elites in society but is available to all and its power cannot be undermined.3 Changing media ecologies gave rise to a concept of narrative building which political actors use in order to achieve political and other policy goals.

The onset of War in Syria: Causes and Consequences of Incomplete Democracy

The war is not essentially the absence of peace but the incomplete performances of key components and determinants of a sovereign state. In this contemporary international relation, state interaction revolves around the dependency of both friends and foes to gain vital national interests. Different states face wars in different scenarios based on their domestic manufacturing and the concepts of state building to tackle the destructions and upcoming worst-case scenario. Apart from political leadership, there has always been an external factor that plays a systemic role to disrupt the peace and stability of the state. In order to understand that particular factor, the author has applied the Mansfield and Jack Snyder’s scholarly idea of incomplete democracy that outbreak the war to help further understand the ongoing Syrian crisis. The main focus of this article is to understand and evaluate the democracy as systemic factor that is playing a significant role to an unending war in Syria even today. The weak and fragile political institutions accompanied by international pressure to overthrow the Assad’s autocratic regime adds more fuel to fire not only for the peace and stability of the Middle Eastern but also dispersed among the European countries as refugee’s crisis. The author claims that, democracy as a systemic factor doesn’t mean complete efficient form of government to satisfy the needs and demands of a common citizen. It further brings more destructions and devastations that a state can never expect in this globalized world.

Nuclear terrorism is referred to the prospective use of nuclear weapons containing fissile material by terrorists. Nuclear terrorism also denotes to the attack of terrorists to sabotage a nuclear facility, destroy a nuclear facility to create massive radiology or use of nuclear fissile material using conventional explosive generally term as “Dirty Bomb” but there is no uniformly agreed definition of this term. According to United Nations International Convention on the Suppression of Acts of Nuclear Terrorism (2005), “Nuclear Terrorism is an offense committed if a person unlawfully and intentionally uses in any way radioactive material… with the intent to cause death or serious bodily injury: or with the intent to cause substantial damage to property or to the environment; or with the intent to compel a neutral or legal person, an international organization or a state to do or refrain from doing an act.”

The EU representative Catherine Ashton in ‘International conference on Nuclear Security: Enhancing Global Efforts’ stated, “Nuclear terrorism, as the risk of non-state actors getting access to nuclear materials or radioactive sources, represents a most serious threat to international security.”3 In the past few years, the nuclear weapons in the hand of terrorist organizations, is the biggest growing concern in the world. Since the 9/11 attacks on the U.S. soil, the world has witnessed an active role of terrorist organizations specially al-Qaeda to acquire nuclear weapon or nuclear technology. The terrorist efforts to acquire a nuclear weapon or weapon grade Uranium or Plutonium for use in an improvised nuclear device pose great threat. In case, terrorists can acquire nuclear fissile material, it’s a hypothetical assumption that such nuclear radioactive material can be used as a “dirty bomb” by detonating it with the conventional explosive device. Such explosive cannot produce similar results as of a nuclear weapon but it will disperse radioactive particles over a wide range. The detonation of such bomb in a large city will not create massive casualties but the psychological terror which will create lead to mass panic situation which could be more devastating. In contrast, the detonation of a nuclear weapon by terrorists will be a nightmare resulting in massive casualties which could be range from few hundreds to over a million, depending upon the yield of the weapon. This paper will focus the options for terrorist organizations to acquire nuclear weapons, its prospectus myths or realities, consequences of nuclear terrorism attack, options to respond to nuclear threat/terrorism, the al-Qaeda’s history and current status to acquire Weapons of Mass Destruction and efficiency of the existing international measures to eliminate nuclear terrorism threat.